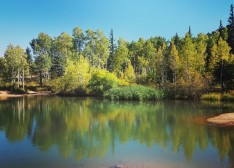 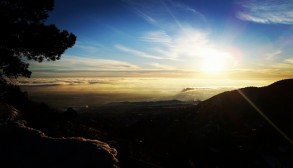 I recently discovered that from 1883 until his death in 1905, a man named John Milton Hay owned the land we recently purchased and now live on, as well as the hundreds of acres surrounding us. We live in the upper portion of a mountain community called Crystal Park, right beside Pikes Peak and just above the quaint Colorado town of Manitou Springs. Upon hearing about Hay and his experiences in this area, I sought out and purchased several books written about his life, as well as a couple pieces of his own work. I wanted to discover all that I could about a man who lived so long ago and yet with whom I’ve shared something so remarkable.

It turns out that Hay was a fascinating man – a statesman, an author, and a poet. As a close friend and personal secretary of Abraham Lincoln, he was with him when he was shot at Ford’s Theatre, and was by his side when he died. Following Lincoln’s death, he spent several years abroad as a diplomat in Europe, mainly in Madrid. He worked for a time at the New-York Tribune and, in 1870, Hay left diplomatic service to write. He spent summer after summer in upper Crystal Park gaining inspiration and writing prolifically. He co-authored a ten-volume biography of Lincoln with his close friend, John Nicolay, and created much of his recorded poetry here. He returned to politics when appointed Secretary of State by President McKinley and continued in office under Theodore Roosevelt following McKinley’s assassination. Hay died in office in 1905.

On September 9th, 1883, in a letter to friend, W.D. Howells, Hay wrote about his first experience on this land…

“Nicolay and I are in camp in a most beautiful and rugged eyrie 9000 feet high, sometimes called Crystal Park, not far from Manitou Springs. If you were here – and someday you will come –I am looking for a place to build a hut, which I hope you will share with me. The bigness of the beauty of this place is something I am not able to describe and shall not try.”

Following that trip, Hay purchased most of the land in the upper park and did indeed build a small cabin exactly a half a mile from our home. As quiet and serene as our experience here has been, with a distant neighbor or two spotting adjacent mountainsides, I can only imagine what it must have been like to be alone with all of this beauty and your thoughts. It has been surreal, inspiring, and fantastic to find and read words written by a man who so long ago lived where I live, saw what I see, and was gifted the same calm and contentment I have received from this landscape.

Each of us knows that the spaces we inhabit in this world were once inhabited by others – and even then, others before them. This reality is often hard to recognize, discern, and let comfort us as ours is a time when the landscapes so many of us exist within are products of man and not nature, and are commercial rather than organic. To know then- so specifically – about a man with whom I share the experience of this alluring place – a man who lived over one hundred years ago – has been a profound and humbling privilege. We have spent pieces of our lives in the same mountainous wood and it has been to each of us a muse and a sanctuary and somehow because of this, I feel connected to him.

And so… to John Milton Hay, wherever you are, I think of you often while on my walks and I imagine you having trodden where I tread. I wonder if this place gave you strength for the struggles in your life in the way it does for me in mine, and if a tear ever came to your eye for the overwhelming gratefulness you had to be able to exist for a brief time here. And thank you. Thank you for reaching through years and years with your pen and your words to intersect with me, and to remind me how precious are the moments I have here.

Simple, evidence-based tools to help you reach your goals

a weblog for teachers (with or without technology)

If You Must Know
THE DOLCE VITA MOVEMENT

THE (SWEET LIFE) CHRONICLES OF A WIFEY WITH A GLUTEN PROBLEM...

Welcome to WaiterStudent.com! The 100% Free Waiter Training Site on the Web!!!

A Journey of Acceptance With A Chronic Disease

Tip Toeing A Line Between Worlds

Good taste in a small space.

What That Girl Said
Tadasana Fit

Yoga to breathe life back into the office

Zen One - The Fresh Maker

I'm just an ole' graff writer who combines my love of art and sneakers...

... beyond diversity to solidarity

What an Amazing World!

Seeing, feeling and exploring places and cultures of the world

Stories and photographs from places “further beyond”.